Home > Entrepreneurship > Ready for a new chapter in your working life?

Ready for a new chapter in your working life? 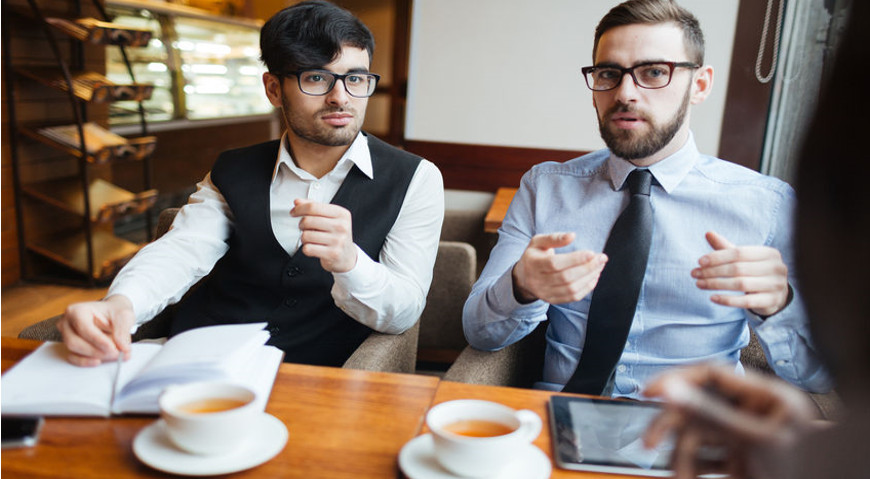 Here’s what happened when two people, from different countries, with very different skillsets, followed a dream to start a business in Dubai.

Imagine the scenario. Sean didn’t spend a lot of time in class during his software development degree at the University of London. In his mid-thirties and already frustrated working for other people, he just wanted to make his own apps; make them and get them out into the world. Problem was, Sean couldn’t figure out how to go from ‘great idea’ to ‘great idea into market’.

Meanwhile, a few thousand miles away, Arun was approaching fifty and nicely settled into a career in finance in Mumbai. Happily married with kids, but wondering if he would ever actually have the courage to start his own company.

These two don’t seem like they were destined to meet. But they did. At a tiny coffee stall at Gitex Technology Week in Dubai. Then later that same day at a symposium on how to start a business in Dubai. Then back at the same coffee stall about two hours later, Sean now breathlessly pitching app idea after app idea and Arun running silent feasibility studies in his head while he listened.

They got on well. We’re talking house-on-fire.

Returning to their respective countries, they hit a slump. Normal life resumed. Sometimes Sean would share a link to some Dubai startup success story with Arun via Whatsapp; meanwhile Arun found himself asking his cousin – a resident in Dubai – question after question about his (failed) experiences trying to set up a business in Dubai. To say they were bad is an understatement.

Finally, there was the call. Sean was nervous. But Arun was way ahead of him. There was an inevitability to it. It was time to make the jump. And the best place, the only place, that they should launch a new company was in the gateway that connected their two continents, Europe and Asia.

They would be returning to Dubai.

The headlines offered a lot – company formation in Dubai was hot thanks to a fast-moving market, a growing reputation as the Silicon Valley of the Middle East, a place that didn’t just encourage new business but had government policies specifically designed to position the Emirate as the place for new ideas to take root and grow.

Company formation in Dubai was hot thanks to a fast-moving market, a growing reputation as the Silicon Valley of the Middle East.

The thought of setting up a business in Dubai – navigating the free zone and mainland options, obtaining the correct visas (particularly for Arun’s family), arranging a corporate bank account. Sean started to have second thoughts. It was intimidating enough in the UK, but in a foreign country there were too many unknowns. Meanwhile, Arun decided it was best not to share the experience that his Dubai-based cousin had gone through – making the mistake of picking the wrong business setup advisor and getting bogged down in month upon month of slow paperwork that eventually led nowhere.

Sean and Arun’s project was time-critical. Going slowly was not an option in the ultra-dynamic app market.

So choosing the right Dubai business setup specialist was vital.

From idea to reality: Company formation in Dubai

Almost three months to the day after Sean had first met Arun at the conference in Dubai, they found themselves sitting across the desk from a company formation specialist at Virtuzone who was explaining the most suitable free zones for their specific business, the process of obtaining visas for both them and Arun’s family, and helping arrange a corporate bank account.

It was all laid out. Simple.

But more than that – the specialist seemed genuinely interested and excited by their plans.

With Virtuzone working hard behind the scenes as a kind of concierge service (even liaising with the UAE government authorities on their behalf), the actual amount of time Sean and Arun would personally dedicate to the entire setup process was about five hours.

They were on their way.

The cost of doing it wrong

So what of Arun’s cousin? Well, he did save a lot of money with his setup specialist. In fact, he saved so much he ended up with no business at all and a load of paperwork that didn’t take him anywhere. It’s like hiring new staff – you only worry how expensive the best employee could be until you realise how expensive the wrong one is.

So for some short-term expenditure, Sean and Arun gained long-term peace of mind. T’s were crossed and i’s were dotted.

So today, if you wander through Dubai Internet City, one of the Emirate’s most famous free zones, you may see a sign that says CHAPPTER 2. It’s a new start for both founders, the beginning of the next part of their story. They’re already growing their team, taking meetings with venture capitalists, and trialling new app ideas.

Once a week, Arun and Sean make sure they have a 1-to-1 where they don’t just talk business, but they try to remember what fuelled their enthusiasm in the first place, all that time ago at a conference in Dubai.

Actually, it wasn’t ‘all that time ago’ – it was just a few months.

That’s how fast the process can be, from first inspiration to making it happen.

You don’t have to be in technology to see the possibilities when it comes to business setup in Dubai. From event planners to personal trainers, the Emirate draws talent and ideas and ambition. So why let paperwork or the fear of bureaucracy stop a fresh start?

From event planners to personal trainers, the Emirate draws talent and ideas and ambition.

Everyone has a new chapter in them.

How does yours start?