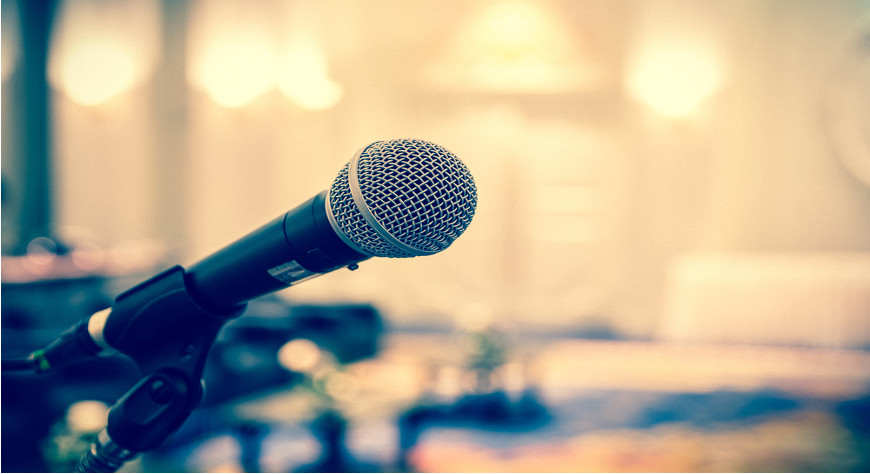 Your heartbeat is raised, your palms are clammy, you swallow hard and the words you had prepared so painstakingly just seem to spin in your head as you look out into a sea of expectant faces.

Jerry Seinfeld once quipped: ‘People’s number one fear is public speaking. Number two is death. That means to the average person, if you have to go to a funeral, you’re better off in the casket than doing the eulogy.’

Can that really be true?

Apparently so. A study in the US by the Chapman University found that over one quarter of the 1,500 people surveyed were either afraid or very afraid of public speaking. What about the other three quarters? It brings to mind the Mark Twain line: ‘There are two types of speakers. Those who get nervous and those who are liars.’

Seeing as most of us are scared of it, you would think we would be better off avoiding public speaking at all costs. But in fact overcoming this common fear has many benefits – starting with an incredible boost to the self-esteem. The fact is that the ability to speak in public can be an invaluable tool in business, helping you create fresh contacts, win new business and convey your vision to a much wider audience.

So whether you have a crippling fear that you want to overcome, or just need a few pointers before delivering that presentation, let’s take a look at nine keys to unlocking public speaking.

The ability to speak in public can be an invaluable tool in business, helping you create fresh contacts, win new business and convey your vision to a much wider audience.

It may sound obvious, but when it comes to nailing a speech or presentation, practice is your friend. Let’s return to Mark Twain for this one: ‘It usually takes me more than three weeks to prepare a good impromptu speech.’ So if you want your words to seem effortless or even spontaneous, you must be willing to put in the time. Practice in a room as if the audience is there, and with time your skills and confidence will transfer when you actually stand up in front of colleagues, prospects and acquaintances.

We all get nervous. That’s a reality. The only difference between a public speaking master and novice is in how they handle it. According to Olivia Mitchell, author of ‘Effective Speaking’, those who are less confident speaking in public get trapped in a cycle of worrying that they appear nervous, which only serves to make them more nervous. She likens it to sports where someone ‘chokes’ on an important play. The key is to put less pressure on yourself, to embrace the nerves, and understand that while important it isn’t a life or death situation.

Dr Albert Mehrabian, author of ‘Silent Messages’, famously conducted research in the early 1970s which found that just 93% of any message is conveyed through non-verbal communication. This figure has been up for debate ever since, but what psychologists unanimously agree on is that body language is a pivotal part of communication. One of many studies to echo this sentiment is that from Spencer Kelly, professor of psychology at Colgate University, who found that talking with our hands is a highly effective way to hold an audience’s attention, concluding ‘gestures are not merely add-ons to language – they may actually be a fundamental part of it.’

Talking with our hands is a highly effective way to hold an audience’s attention. Gestures are not merely add-ons to language – they may actually be a fundamental part of it.

Dr Mehrabian’s famous study of communication also gave us the oft-quoted statistic that 38% of any message is delivered through vocal elements such as tone. Again, many studies over the years have disputed this exact figure but what they agree on is that it certainly plays a huge part. A speaker’s voice may be up to twice as important as the message. This accounts for the hours of vocal coaching many politicians go through when running for election. So, how should we sound? For one, a monotonous drone is a sure-fire way to switch off your audience. So mix it up. Then there is speed. According to speech communication and phonetics expert Jennifer Pardo: ‘In general people who speak a little slower tend to be perceived as more friendly or benevolent while we often associate things like competence and authority with people who speak a little faster.’

5. Know who you are speaking to:

Here we have another tip that may sound obvious, but you would be amazed at how many people stand before an audience with little to no knowledge of the people in front of them. If you want truly to engage with the recipients of your message – as any public speaker should – you must have at least an idea of their interests and motivations for listening in the first place. If you don’t understand who you are talking to or why they are listening then your chances of making any sort of connection are minimal.

It may sound silly, but there is in fact plenty of research that shows simply adopting a power stance can help you feel more powerful. A 2009 paper published in the European Journal of Social Psychology found that people were more inclined to act and think confidently when standing with their back straight and chest out. As well as making you, the speaker, feel more confident, a strong stance – feet planted solidly on the ground, arms open, shoulders back – can also convey confidence and authority to your audience.

As I’ve already covered, preparation is key. Knowing your speech or presentation inside and out is only going to help with confidence and delivery when you do it for real. What you must avoid, however, is simply standing up, saying your piece and sitting down. It is important to make your audience feel involved in what you are saying. After all, the reason you are there in the flesh rather than delivering a written paper is because the audience most likely values a social and interactive connection. So, don’t be afraid to address the audience directly, comment on or react to the tone of the room or invite questions at natural breaks during your presentation.

There is plenty of advice out there that encourages public speakers to look slightly over the heads of their audience when speaking. While this may calm nerves, when it comes to delivering a killer speech, it is going to work against you. Not only does avoiding eye contact make you seem less confident and authoritative, but holding someone’s gaze for just a few seconds helps a speaker appear trustworthy. In the words of Brian Wansink, a professor at Cornell University, it can ‘…inspire powerful feelings of connection.’ Wansink and his team conducted a study, published in the journal Environment and Behaviour, that found subjects were more trusting even of a brand of cereal if the cartoon rabbit on the packaging was making eye contact rather than looking away. That’s how sensitive we are to eye contact.

Not only does avoiding eye contact make you seem less confident and authoritative, but holding someone’s gaze for just a few seconds helps a speaker appear trustworthy.

While all public speakers want their words to do the talking, most of your audience will have judged you before you have even opened your mouth. Long before in fact. Many studies over the years have shown people to make these kinds of assessments in less than a second. Princeton University researchers put the figure at one-tenth of a second – and longer exposure made little difference to the original thought. So our first judgement regarding everything from attractiveness to trustworthiness is made in a split second and doesn’t really change. Quite simply, start as you mean to go on: Make the best possible first impression by incorporating as many of the above mentioned points as you can. Even just one or two can make all the difference.

So there you have it – the 9 keys to unlocking public speaking. And to go back to our original point, don’t forget that you’re not the only one who gets nervous speaking in public. At least one quarter of people surveyed said they found it very difficult – and if Mark Twain is to be believed, the rest are probably just lying. It’s tough, and there are many points to both follow and avoid. But if you can take each one as a step, and look at ways of slowly integrating it into how you prepare, you may find in time that while you never love public speaking, it becomes something much more manageable in your life.